By Leah Garcés, Compassion in World Farming US Director

You might not have caught it, but at the end of Stephanie Strom’s article this weekend in the New York Times, Perdue made a big reveal.

Back in December 2014, Compassion in World Farming released a video showing chickens raised in tightly packed warehouses, lying on feces-ridden litter with red, raw bellies. To make matters worse, Perdue had been calling their production system ‘natural’ and ‘humanely raised.’ The video went viral overnight after being featured in the New York Times by Nicholas Kristof, and today has over 2 million views. Consumers were outraged. On the one hand the company was marketing their birds as antibiotic-free. But on the other hand the video revealed dirty, overcrowded, suffering birds – a far cry from what consumers imagined from a ‘natural’ label. 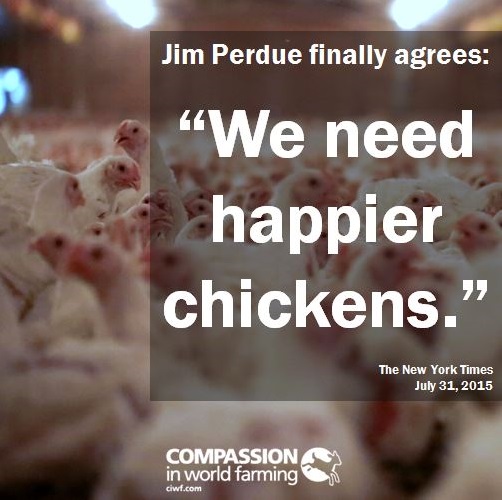 Until this weekend’s article, it was uncertain whether Perdue was doing anything to address the welfare issues raised in the video. The video called for more space, natural light, and slower growth to address inherent leg problems. At the time, Perdue blamed whistleblower Craig Watts for poor management practices, rather than taking responsibility. In reality, they had simply run before they could walk. They had taken out antibiotics, before addressing the conditions causing suffering in birds.

It would seem in the last months, Perdue have been exploring exactly just what good animal welfare does mean and the latest science on that. Bruce Stewart-Brown, who is in charge of animal welfare at Perdue, visited the EU to learn more about progress in animal welfare, reported Strom. This may be our best indicator Perdue is investing in researching better systems. He even refers to touring higher welfare indoor systems that use windows to bring natural light to the bird, a system already in practice in England, and one advocated by Compassion in World Farming.

Professor Marian Stamp Dawkins, revered animal behavior scientist at Oxford University, has recently begun talking about a simple definition for animal welfare. In her book, Why Animals Matter: Animal Consciousness, Animal Welfare, and Human Well-being she says it comes down to some simple questions: Is the animal healthy? Does the animal have what the animal needs and wants? Mr. Stewart-Brown refers to this definition in the article - an exciting evolution from the often simplistic look at welfare, where only health is considered.

The article finishes off with a significant statement from Mr. Perdue. “We need happier chickens.” It’s an admission that they aren’t happy now, and that Perdue should do better.

Do we dare feel a glimmer of hope for chickens? Perdue has perhaps begun an important and much needed journey. Where they have led the way on antibiotics, perhaps they will take up the same leadership position when it comes to welfare. But for now, conditions remain the same for chickens, and consumers will continue to need to keep a watchful eye.