Featured by Maryn McKenna in National Geographic's 'The Plate'

As part of the 4th annual Pastured Poultry Week, Compassion in World Farming is releasing a new video depicting one family taking a stance against factory farming, despite having a huge amount to lose.

For over 15 years, the Herman family was a contract grower for several large chicken companies. Not only were the Hermans uncomfortable with being required to raise sickly birds without fresh air, natural light, or access to outdoors, but they found themselves sinking further and further into debt trying to keep up with upgrades to housing equipment mandated by the chicken companies. They were finding it difficult to make ends meet, losing $30,000 per year, due to receiving sickly birds. When they confronted the company for help and for a pay raise, the company refused.

The Hermans realized that they would never get ahead and in December 2014, made a brave stance to walk away from raising factory farmed chickens.

Teresa Herman explains, “I know a lot of moms that… pay five bucks for a pack of chicken, and it’s a cheap way to feed their family. But in reality, is it a cheap meal? What’s the final cost?” 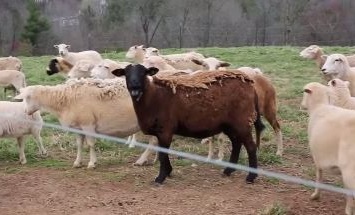 The Hermans decided instead to pay off their remaining debt with pasture-raised cattle and sheep. In addition, they have recently added pasture-raised laying hens, repurposing their old meat chicken barns. Only six months after quitting chicken factory farming, they run a pasture-raised, multi-species farm with a rotational grazing model that’s better for the soil, the environment, and animal welfare, not to mention their own family welfare. Their farm animals are free to roam outdoors on pasture, while the Hermans are free from unfair treatment by the factory farm industry.

Leah Garces, US Director of Compassion in World Farming says, “The Herman represent many farmers around the country who are fed up with factory farming. They are fed up with the way they are required to keep their animals in inhumane conditions and they are fed up with their debt and living near or below the poverty line in order to deliver chickens to America’s dinner plates. We know there is a better way for the animals and the farmers.”

The Herman family is proof that a better way is possible. Compassion in World Farming believes a chicken should be allowed to be a chicken and farmers should be treated fairly. During Pastured Poultry Week 2015, we celebrate that better chicken is possible. Pasture-raised is the gold standard compassionate farmers, consumers, chefs, and food businesses are striving for.

What you can do