Today marked a historical tipping point in the United States, as retail giant Walmart published a new position paper to address farm animal welfare. The company is the leading retailer in the country, with Walmart’s largest merchandising category as groceries. It accounts for 56% of sales—or $188 billion.1 According to the USDA (U.S. Department of Agriculture), Walmart was the largest seller of grocery items in the US in 2013. 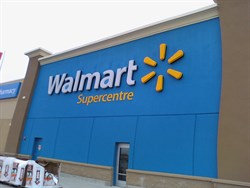 The highlight of the policy is Walmart’s recognition of the five freedoms of animal welfare. This is an acknowledgement that farm animals should be protected from fear, stress, and pain. The principle also recognizes farm animals should have their basic needs met including providing food, water, and shelter and an environment that allows them to express natural behavior.

Walmart also asks suppliers to specifically address concerns related to closed confinement systems and painful procedures. These include gestation crates for mother pigs, barren battery cages laying hens, and veal crates for calves. In addition, they call out tail docking and castration as areas to be addressed. While no date was set on implementation, the clear language is a step in the right direction and will send a message to producers not to reinvest in equipment from these systems.

“Walmart, as an industry leader, has helped ensure today that these inhumane cages and crates for farm animals will go the way of the dinosaur. There is no turning back when the largest retailer in the country begins to turn its back on these cruel systems,” continued Lymbery.

Since 2012, Compassion in World Farming has been involved, through the Business Benchmark for Farm Animal Welfare, with benchmarking Walmart along with other global leaders for investors with regard to farm animal welfare policies. In 2012, Walmart received a less-than-favorable report, ranking in the lowest tier for its farm animal welfare policies. The company, however, continues to make meaningful strides toward continuous improvement for farm animals and with this new policy is expected to climb the ranks.

This comes in a year when retailers and restaurants across the United States are moving away from closed confinement systems such as gestation crates, battery cages, and veal crates and are adopting overarching farm animal welfare policies for the first time. Recently, food service giants such as Nestlé, Starbucks, and Aramark released similar policies.

“Food businesses are hearing the message loud and clear,” said Lymbery. “Animal welfare matters. It matters to customers, to the sustainability of the environment, to the future of the company, and last, but not least, to the animals.”