The following is a reprint of from Compassion in World Farming CEO Philip Lymbery's blog . You can see our full response to the Coalition for Sustainable Egg Supply study here.

Today we look back on the great injustices of the past – slavery, woman suffrage, segregation and think – how did society allow that to persist? In the end, injustices fall and ‘the arc of the moral universe bends toward justice,’ as Martin Luther King once said. 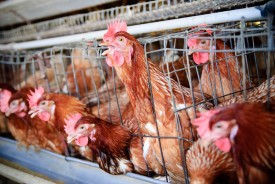 One day, in the not too distant future, we will look back on the practice of confining farm animals in cages and ask the same thing – how did we ever permit such cruelty to become normal? Compassion in World Farming’s End the Cage Age video, calls for an end to the era of cages. After all, cages have only been part of agriculture for a relatively short period. And they can just as quickly be dismantled. The writing is on the wall. Cages are increasingly being phased out by companies and governments alike, as consumers’ preference for products like cage free eggs continues to increase and scientific evidence, which also concludes that cages can never allow for good hen welfare, continues to mount.

Last month a group composed of food and agribusiness stakeholders, called the “Coalition for Sustainable Egg Supply,” released a study that is clearly out of step with this consumer preference and scientific evidence. The report made comparisons between barren cages, furnished cages and cage free systems. It is the result of three years’ worth of work over two flocks. Unfortunately, the study was never going to show the potential that cage free systems have for good welfare when compared to caged systems. It was never set up to do so.

For example, hens in the cage-free systems were only allowed 1 sq ft (144 sq inches) per bird. Even the United Egg Producers, who represent the majority of the US egg industry, states that “a minimum of 1.5 sq ft (216 sq inches) per hen must be allocated to allow normal behaviour.” Cages inherently mean a bird cannot fully exhibit natural behaviour. They cannot have good mental or physical well-being.

While the report is quick to report mortality and feather pecking as higher in cage-free systems, the results are shallow. The study fails to look in-depth at commonly used management tools used to combat negative welfare outcomes and other means of tackling poor welfare that go beyond just physical well-being. Welfare is a complex cooperation of physical well-being, mental well-being and ability to express natural behaviour. Like three legs of a stool, one cannot work without the other to support good welfare. It’s not just about the death toll.

Mortality, and negative outcomes like feather pecking, can be higher in any system, including pasture raised, if a system is poorly managed. Key to low mortality and positive welfare outcomes in cage free systems is applying the right management to that production system. Keel bone problem? Well, there’s a protocol for tackling that in a cage free system. Feather pecking problem? Again, there’s a solution to that too. But this study did not even give sufficient space for hens to exhibit natural behaviour, let alone delve into good management practices.

Management systems and an appropriate veterinary health plan are vital to good health status and low mortality and both are very much determined by a positive producer attitude to the system he/she operates. While the study reports mortality is higher in cage-free systems, other science indicates this is overcome by good management practices. Mortality in a new free-range system in Australia, for example, was reduced from 21.9% to 5.7%, comparable to that in caged systems, in three consecutive flocks after the introduction of good management practices (Shini et al., 2008).

What’s clear is that the Coalition for Sustainable Egg Supply report is not a good roadmap of the direction of travel for policy for companies or governments. Cages are on their way out, and no amount of partial science can change that course.

We’ve made statements in the past that enriched cages aren’t acceptable as a next step. Consumers will continue to move away from cages, and towards the companies and leaders embracing this practice. The companies that have seen the writing on the wall, such as Burger King, Starbucks, Unilever, Whole Foods, Marriott, Heinz, Nestle and Sodexo — who have committed to using 100 percent cage-free eggs – are the ones that will continue to lead the way into the future of our food. The ones that don’t will likely be left behind.

Read our full response to the Coalition for Sustainable Egg Supply report.