Out of sight, out of mind

The modern broiler chicken is unnaturally large and has been bred to grow at an unnaturally fast rate. This selective breeding comes with serious welfare consequences:

In Georgia, the typical grow house is 50 feet wide and 500 feet long- over 35% longer than a football field. While that may sound large, one house can contain more than 30,000 chickens.  At such densities, each bird at slaughter weight has only about as much floor space as this piece of paper.

Thirty thousand chickens crowded together in an enclosed area produce enormous amounts of animal waste, which accumulates over the growth cycle.

At the end of the ‘growth cycle’, chickens are caught manually and placed into crates that transport them to slaughter. The crates are stacked 10 high.

The factory farming of chicken is having a negative impact on human health in the form of foodborne illnesses and antibiotic resistance:

Growers, catchers and processing plant workers are detrimentally impacted by the factory farming of broiler chickens.

Georgia has become the leading broiler producer in the nation, but only at great costs to animal welfare, human and environmental health, and farmers and workers.  We believe Georgia can become a leader in promoting a fair, humane and sustainable alternative. 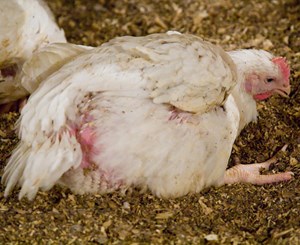 "Out of sight, out of mind: the impacts of chicken meat factory farming in the state of Georgia". An investigation report produced by CIWF USA for Georgians for Pastured Poultry (GPP).